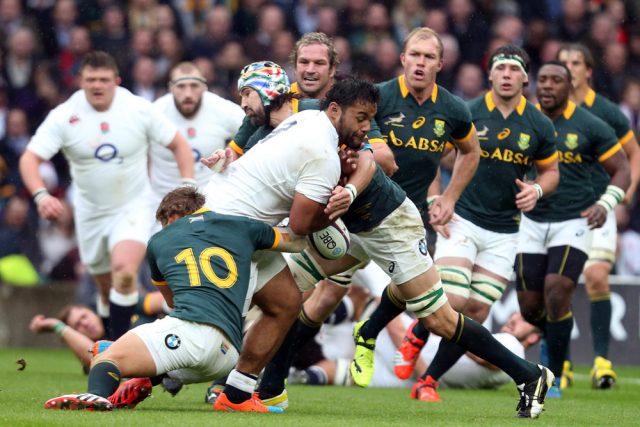 What a test match and what an advert for test match rugby in South Africa.

A new dawn in the famous green jersey was ushered in on Saturday with a first test victory of the Incoming Series for South Africa over England.

The stage had been set perfectly for the Springbok’s to make the sort of romantic start to Erasmus’ time in charge a perfect one. A new head coach, the first black captain of South Africa and the stadium where history will always remember the nation’s greatest sporting moment.

With 20 minutes gone though it seemed that the players had forgotten not just their lines but also the complete plot and story line as England waltzed through their defence time and time again with ease to race into a 21 point lead.

Something had to change quickly and it did. In big games you need big players to step up to the plate, show some leadership coupled with composure and most importantly of all, not panic.

Much had been made of who the South Africa head coach should be allowed to select due to the location of where they play their domestic rugby but there will be no argument after this match as three players that currently reside in Europe will not have had to pay for a single drink in a Jo’Burg bar after their performances.

Faf de Klerk, Duane Vermeulen and Willie le Roux were on another level to everyone else on Saturday and their performances dragged the Springboks back into this match.

De Klerk put in one of the most masterful performances from a scrum half in recent test rugby history as he mixed his game up to put pace on the ball and get his backline moving forward at speed.

This released Le Roux to have carte blanche on where he popped up and put the fear of God into the retreating English defence whilst releasing Aphiwe Dyanti and Sibusiso Nkosi to wreak havoc.

The combination of Le Roux, Dyanti and Nkosi as the back three is one that is now here to stay. Mistakes were made defensively by the two young debutants but that should not overshadow their attacking destructiveness. With Le Roux guiding them around the field and advising as he did, they will continue to learn and that part of their game will be tightened up with every match that they play.

All eyes will have been on new skipper Siya Kolisi before kick off as he took charge of the on field reigns for the first time but those preying eyes were soon moved onto Duane Vermeulen.

The thor-like Number 8 who plays for Toulon in the South of France just added the final je ne sais quoi to this Bok bashing of England as he took full control of the breakdown area like a hungry jackal.

He was over the ball constantly and never let up for a second. An immoveable object that his opposite number Billy Vunipola couldn’t budge an inch. His role was vitally important in slowing the Red Roses down because defensively South Africa did struggle and looked extremely vulnerable so the best way to stop them was to not give them the ball. Something the home team did admirably.

It wasn’t just the European based contingent that won this match for the Springboks though as there were delightful cameos from the likes of RG Snyman on debut and Handre Pollard kept his game simple as he recognised the flair was coming from elsewhere in abundance.

England have lots of work on their hands this week in training but unfortunately it seems to be the same old age problem that is effecting them; the breakdown.

The attacking ball wasn’t quick enough which lead to George Ford often running out of ideas and kicking to an extremely dangerous back three but also they couldn’t stem the tide of the green attacking ball.

Tom Curry was added to the team for his pace and ability to get over the ball but he ended up playing like a blindside flanker as he was chopping onrushing attackers to the floor rather than getting his hands over them whilst still on his feet. Th game seemed to pass Chris Robshaw by and Billy Vunipola struggled to impose himself on the game as effectively as Vermeulen was.

This prompted Eddie Jones to make an early change as second row Nick Isiekwe was replaced by Brad Shields to add a fourth back row option to the English pack. A strange decision from Jones considering Shields had never experienced the pace and intensity of test match rugby before and this game was faster than most normal tests as well. Shields was another that struggled to find a foothold in the match and never really had the influence that Jones was desiring from him.

All of that said though England still scored nearly 40 points so positives can be taken but watching the backline retreat in fear off every first phase ball and Ford being targeted time and time again by the big ball carriers was not a pretty sight. More worryingly from an England’s perspective is that these are not new sights and wondering when that will change is what causes frustration. It’s making them predictable and easy to attack.

Running hard in the ten channel sucks in 2 or 3 players straight away which in essence is a whole back row because they don’t trust that Ford will make the tackle. After that it is a veritable attacking banquet running at bigger and heavier forwards.

Bloemfontein’s Stadium for the second test is again at altitude and although Eddie Jones has played down the effect it has on the players it certainly lends more to South Africa’s speedily natured game, so devising a game plan that will slow that down will be key.

For the men in green they will want to see more of the same in attack and a bit more of assurance in defence.
Their fans should not get carried away by this one performance but should certainly be hopeful and optimistic of what lies ahead.

A great opening to the Erasmus show but remember that stage fright can easily lead to you fluffing your lines on the second night.