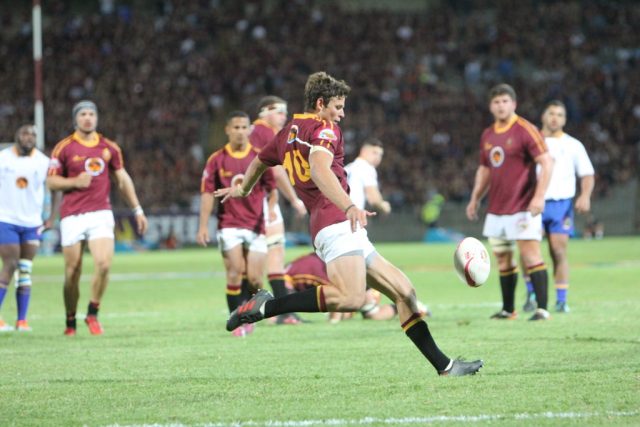 I’ve been in South Africa for nearly a year now and upon making the decision to start my own rugby Website, I decided to immerse myself in the rugby culture of South Africa both inside and outside of the stadium.

Residing in Paarl, I don’t have a choice but to have School’s Rugby in my face 24/7, which may be seen as a blessing or a curse, depending on whether you are me or my wife.

I was blown away by the sheer scale of the competition here and wrote a very similar article to this one after my first Interschools experience.

Newland’s has been frequented for Super Rugby and also when England gave the Springboks a beating in the rain. Recent Western Province rugby politics aside, this was a pilgrimage for me and one that I felt I needed to document that as well.

Just after stepping off the plane in Cape Town, the Varsity Cup Final was about to be played and getting sign off from the other half when boxes needed unpacking was going to be tricky so I erred on the side of marital caution and followed the local media outlets for the result and report.

When picking up the paper the day after I was taken aback by the size of the crowd in the photo adorning the front and back page plus the amazing back drop of the Danie Craven Stadium which is set in the mountains of Stellenbosch. Maties had comprehensively beaten NWU Pukke in the final on their home turf.

I can assure you that there is no where near the same sort of attention given to University rugby the U.K.

I knew I had to be a part of this so a few weeks ago I enquired about media access and was very pleased when it got approved for the Danie Craven Stadium.

Monday night was the night of the first game and off I toddled into Stellenbosch to cover Maties v Wits in the opening round of this year’s competition.

I didn’t know what to expect and that sort of nervousness thrills me. I read all the rules and regulations as I knew some differed to the mainstream game but other than that, I only had word of mouth to go by.

Driving through the town was a buzz in itself. It felt like a Premiership match back in the UK with the amount of people walking to the ground, beers being chugged on the balconies of student accommodation and the bars spilling with people.

My media access allowed me to park next to the stadium and after finding the media section I set up and waited for the match to start. 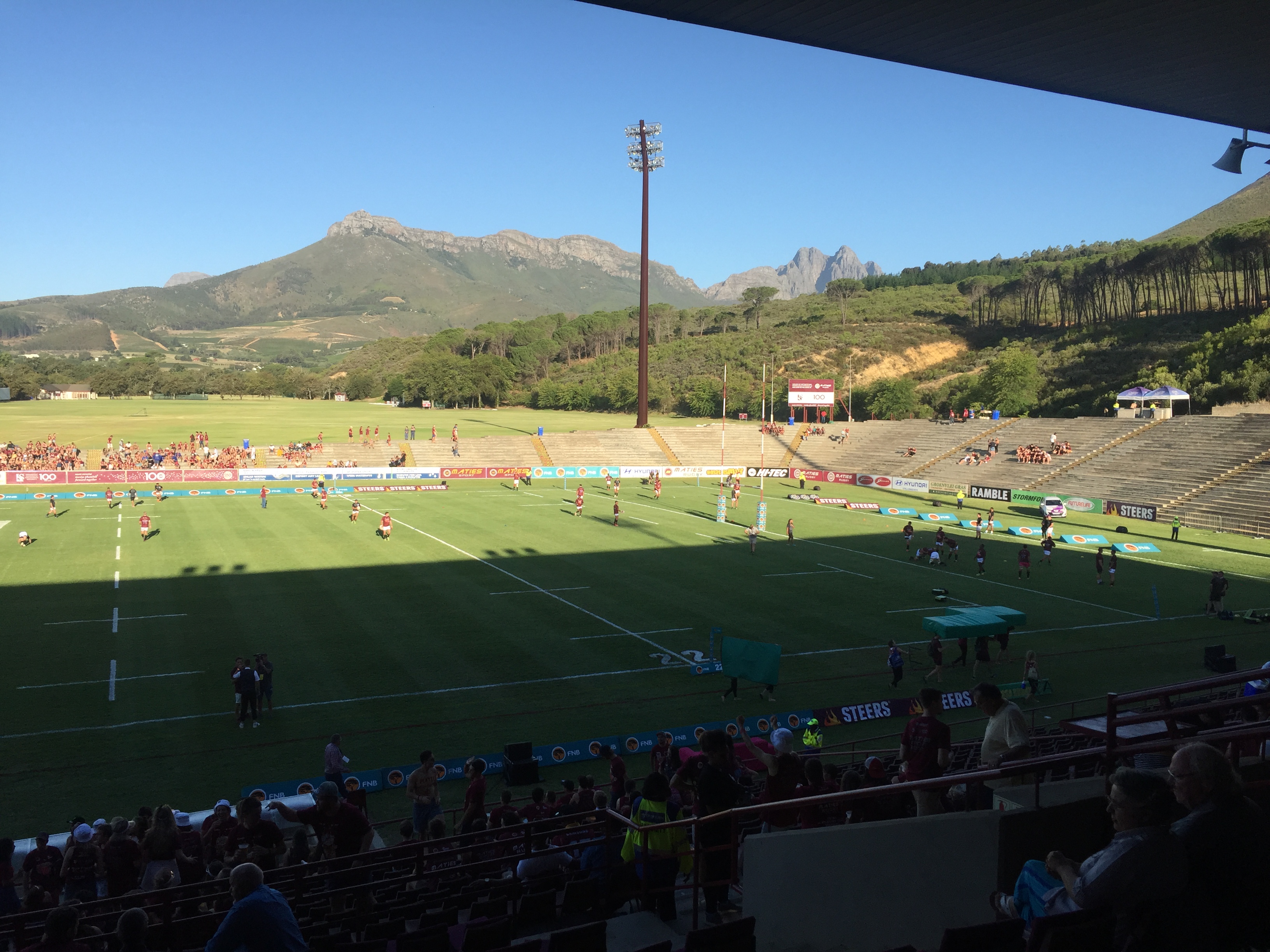 I wanted to take in the surroundings first and foremost. A maroon tidal wave was pouring in to stadium and in the background were majestic mountains. I’ve watched rugby in some beautiful surroundings around the world but this was on another level. 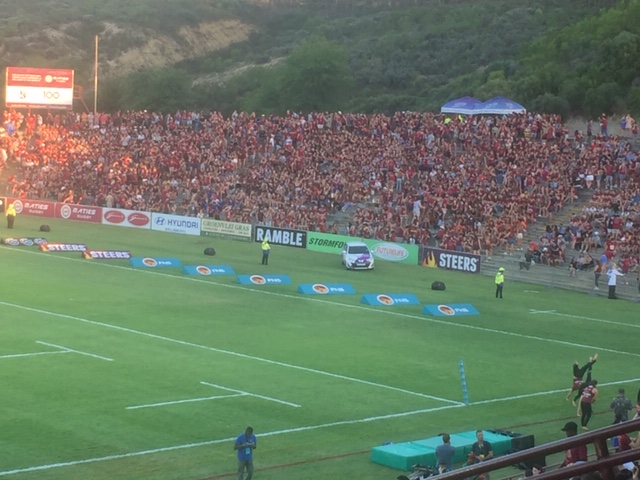 Away to my right was a rising bank of concrete steps that by kick off was one blur of maroon. It looked and felt like an amphitheatre.

Mascots were running around, flags were flying past my eyes and the beers were flowing – for the student supporters, not me……ever the professional of course. 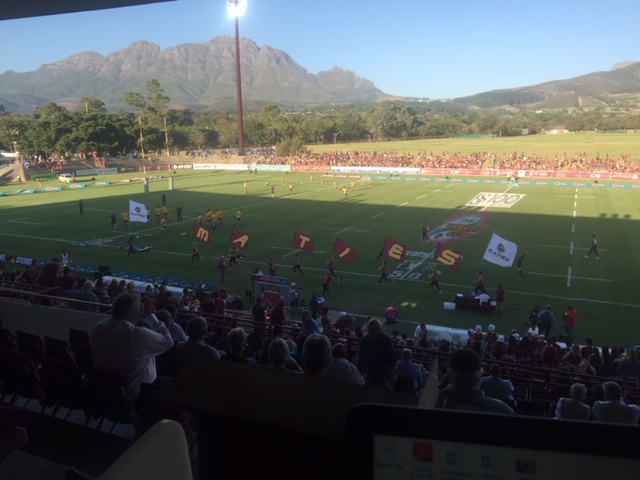 Then, the Gladiators arrived into the arena at a slow walking pace accompanied by dramatic orchestral music.

The national anthem was spine tingling and kick off was upon us.

Laptop ready, Twitter Ready, crowd ready, Scrum5ive ready, Zombie Nation blaring out of the speakers and away we go.

Oh dear, the pause button has got stuck on the music and they can’t turn it off. Any minute now, it’ll go off. Any second now………oh there’s another tune, another, another and another. Commercial dance music is played for the whole game, whether the ball is in play or not. I thought that this was going to annoy me but when you get used to it, it’s kind of cool and does add to the atmosphere. I now fully understood why the hashtag for Varsity Cup is #RugbyThatRocks

When ‘Sweet Caroline’ came on I almost broke protocol, closed my eyes and imagined I was 6 pints of Guinness deep during half time at Twickenham.

The only time the music gets turned down is when there is a kick at goal. Old school rugby values can’t be forgotten all the time! 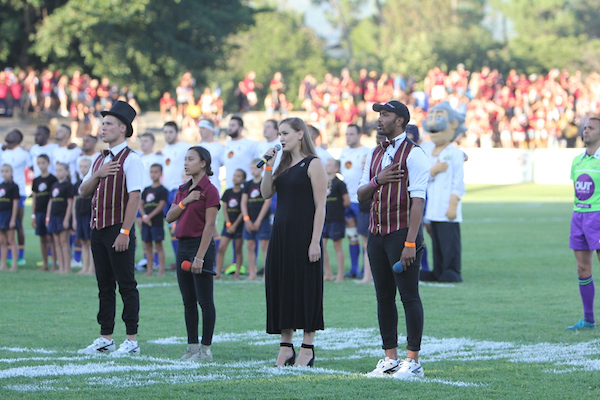 At the front of the grandstand there are two men energetically bouncing up and down the touchline with microphones sending the hypnotic crowd into a frenzy.

Nick and Wesley, sporting a waistcoat and top hat, are doing an amazing job of getting the crowd behind the team. I drove home with ‘Maaaaaaaaaaaaaaties’ stuck in my head all the way.

The rules differ slightly to what you usually expect from a rugby match and one sticks out in particular. The ‘point of origin’ rule means that if you start with possession in your own 22 and score,  the try is worth seven points with a conversion still to come. 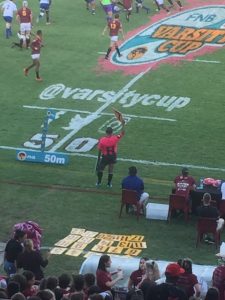 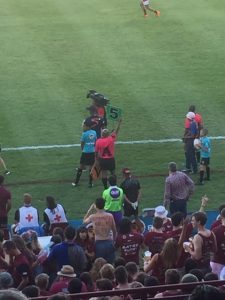 Two assistant referees, one with A (away) and one with H (home) emblazoned on their shirts, patrol the touchline holding up a card with a 5 or a 7 on it so the players on field and supporters off it know what is at stake.

I suppose I should also mention that there was actually a serious rugby match taking place as well. The standard was excellent. Offloading and attacking lines were sharp but defensively the structures were well drilled.

Maties had wrapped the game up with 5-10 minutes to go but Wits never stopped pushing. The last 5 minutes they were camped on the Maties line but the effort from the home team was immense. Tackle after tackle was made as bodies were flung whole heartedly into contact. A lesser team may have just allowed the game to peter out with a late score merely a way of killing time.

This was two committed teams going hammer and tong for the full 80. Serious business and you can now see why players like Aphiwe Dyanti have succeeded through the system and gone on to claim the highest of international honours.

The whole concept of Varsity Cup is Francois Pienaar’s brainchild and he is as committed to it as the Maties and Wits players were on Monday night.

The former Springbok Captain and World Cup Winner regularly takes trips to America to monitor what is working and not working in the NFL as well as College American Football.

The inspiration for Varsity came from these two concepts and each year it gets bigger and better thanks to the efforts of people like Pienaar working hard in the background. 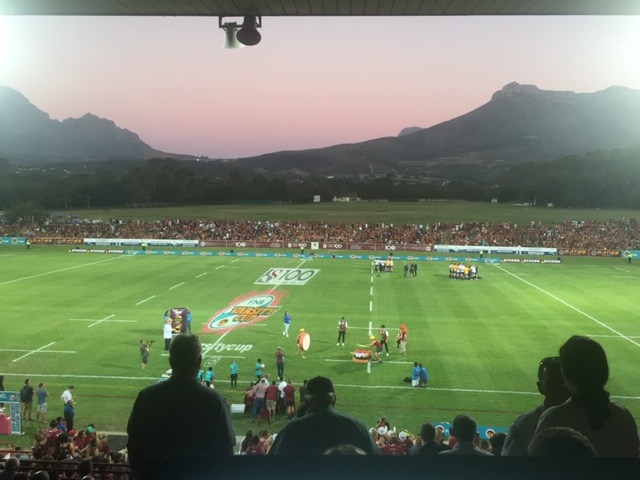 I am a rugby purist, possibly even a traditionalist, who can be stuck in their ways around rugby and how it should be played and broadcast.

I have been heard at Twickenham by the unfortunate surrounding fans screaming ‘This isn’t a F*~}^>g Taylor Swift Concert!!!!’ when the crowd start turning on their phone lights and waving them about in the 70th minute as dusk is settling in. Refer back to my earlier Guinness comment please for an understanding of my behaviour.

I love rugby and that’s why I buy tickets; to watch it.

Varsity Cup should be the antipathy to my rugby morals but genuinely, I think it is fantastic.

I used to work at the Oval Cricket Ground in London and in the Long Room all of the members that had been there for 60 years used to say that T20 cricket was the devil and four day matches with 12 people watching was what Cricket was all about.

I did often wonder why they would then turn up in buoyant mood on a Friday night and drink more ale with a smile on their face for two hours than they did in between naps on a rainy Tuesday?

It’s because there is a place for it. It will never replace Test Cricket but we should allow it a seat at the table.

On a base level it is a sport that is played quickly, it’s lively, it keeps you interested and it draws in the masses. What is not to like?

The model around Varsity Cup will not take over test match rugby. There would be a rebellion from boring people like me but there is certainly a place for it.

The crowd demographic is perfect. Students who live locally and love their University come out in droves for a cheap ticket and some fun.

In the grandstand there are people of all ages watching and loving every minute.

The sport is fast and furious but high quality at the same time.

It’s bold, it’s brash and I was dubious but I have definitely been converted.

If I could have a Guinness tap installed on my media bench for the next game then I think I may find myself in Rugby Heaven.

Six things from the Six Nations

Eddie Jones to coach the Barbarians against Fiji at Twickenham