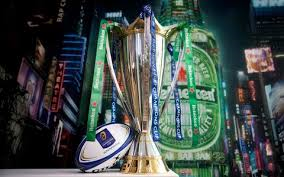 Leinster didn’t hesitate to scare the living daylights out of their competition in this year’s Heineken Champions Cup after a brutal display of accuracy, power and high levels of skill wiped the floor with Wasps on Friday night at the RDS in Dublin.

All of their star names turned up to the party and put on a show of international class rugby during their 52-3 mauling of the men from Coventry but more impressive was the performance from players 1-15. Sean Cronin and Tadhg Furlong showed touches in the backline that most international centres would have been proud of. If there is any potential weakness in this side then I certainly didn’t see it.

On Saturday things only got worse for the English Premiership sides.

Bath should have beaten Toulouse at home in what was a pulsating encounter but this game will only be remembered for one thing and one thing only: Freddie Burns’ horror two minutes. He missed a penalty in front of the posts that would have given the home side a lead after 77 mins but thirty seconds later his world collapsed around him. Clean in under the posts and grinning with relief he had the ball slapped out of his hands by Maxime Medard and cost his team the winning score. Substituted 30 seconds later and  losing 22-20 just rubbed an extra couple of kilograms of salt into his wounds.

Leicester also came unstuck against an Ulster team that have been lacking any serious domestic form. Both teams are languishing in their respective domestic leagues but the sheeting rain helped Ulster claim their 5th successive home win against Leicester in Europe.

Leicester were just 3 nil up at half-time but after the rain continued to pour it was Ulster that played the conditions better to dominate up front and score three tries to seal a 24-10 victory.

At Sandy Park, Exeter scrapped for their lives  to hold off a red tidal wave against Munster and earn a 10 all draw.

The Chiefs edged the first half and a try from Luke Cowan-Dickie put them in the box seat but for the second 40 it was all about defence. Time and time again the Munster attack came pouring at them but somehow it was repelled.

Eventually CJ Stander barrelled over for the men from Cork to collect two points for the two times champions.

The weather in Wales unfortunately stopped Scarlets and Racing 92 from putting on the running rugby show that we had all hoped for but it was heartbreak again for the men from Llanelli. In an attrition of a match they were beaten at the death by a penalty try following the collapse of a Racing driving maul.

The Scarlets will feel that this was one that got away and they should have walked away with four points but unfortunately a combination of missed kicks and some inaccuracies at crucial times cost them in the end. Racing travelled back to Paris with a 14-13 victory.

The final game on Saturday was in Montpellier as the French high flyers hosted Edinburgh.

Montpellier looked in control at half time but a second half fight back from the Scotsmen almost caused an upset.

There were times that Richard Cockerill’s charges couldn’t even touch the ball but they always stayed in touch as the French outfit looked to secure the try bonus point in the first half.

But for a late disallowed try though, Edinburgh could’ve snatched it after an impressive second half performance.

They did leave with a losing bonus point as consolation after their first game in the Champions Cup for 5 years ended 21-15 to the home team.

At Kingsholm on Sunday it was Danny Cipriani yet again that just can’t keep himself out of the headlines.

This time it was for all the right reasons as Eddie Jones watched on in the pouring rain.

14 points from the boot of Cipriani against Castres gave Jones a timely reminder of the fly-half’s ability.

He controlled the game throughout and also played a huge part in Callum Braley’s try for Gloucester with dummies and reverse passes all on show.

Castres had a chance to win it late on and but for a dropped ball in the maul they would have but Cipriani’s performance alone meant he and Gloucester deserved to win this one.

Gareth Anscombe silenced many a doubter in Cardiff’s victory over Lyon in France on Sunday.

Lyon started the brighter of the two teams and scored early through Loan Goujon but Cardiff were not rattled and soon took control of the Champions Cup debutants.

Ollie Robinson and Tomos Williams bagged a couple of very well worked tries but it was down to Man of the Match Anscombe to seal the victory.

The full-back received the ball on the half-way line and proceeded to weave and jink his way to a memorable try that deflated their French opponents.

To add insult to injury, Anscombe landed a late penalty to take the losing bonus point away from the hosts.

The game ended 30-21 in favour of the travelling Blues.

Saracens travelling to Glasgow had all the makings of a classic running rugby match but in reality we were left with the opposite.

This was a brutal contest between two top sides and Glasgow will no doubt be looking back at the decision making of Mathieu Reynal as a contributing factor to their loss.

Saracens came, got the job done and disappeared back down south with a 13-3 win but they will know that there was an element of good fortune to this victory.

Alex Lozowski looked to have been knocked into touch before the Saracens try  of Michael Rhodes but it when unnoticed.  Then, with two Warriors tries disallowed, DTH van der Merwe had his hair pulled by Michael Rhodes in an altercation. Again, Reynal chose not to punish this misdemeanour.

Maro Itoje and Billy Vunipola did bring some light heartedness to one of the Warriors’ disallowed tries though as they celebrated the ‘try’ with their opponents knowing full well that it had been disallowed.

The biggest shock of the round came in the South of France though as Newcastle Falcons became only the second English team to win in Toulon at the Stade Mayol.

Falcons conceded a try after just 23 seconds but fought back to gain a one-point lead at half time.

Le Rouge et Noir laid siege to the Premiership’s bottom team but mistakes and costly errors kept giving Joel Hodgson a chance to keep the away team’s score ticking over.

As the lead continued to change hands Toulon were awarded a kickable penalty late on to re-take the lead but instead head coach, Patrice Collazo, ordered the team to kick to the corner and go for the jugular.

It ultimately failed and the Falcons flew back North with four points in the bag.

What was your favourite game of the weekend?

At the Bottom of a Ruck – David Rose

SOUTH AFRICA WILL BECOME AN EXPORTER OF RUGBY PLAYERS