When one hears the term “Classic Eastern Cape Clash”, games like these always spring to mind.

No matter the year or circumstance, the fixture between Grey High and St Andrew’s College is always one of intense rivalry and excitement. Looking back in recent years, St Andrew’s have had the slight upper hand in the fixture, winning the previous two meetings.

A last minute winner from St Andrew’s in 2017 allowed them to win a nerve wrecking game, 41-36 whilst 2018 was another prime example of a classic clash – with St Andrew’s winning narrowly 15-14.

The months of hype, excitement, rivalry and talk, all finally came down to an eagerly anticipated First XV clash on Lower Field. The Grey boys dominated in the junior ranks but St Andrew’s managed to achieve some impressive wins in their senior age groups. 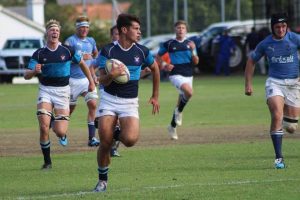 The game started off slowly, with both teams wanting to learn about their opponents and not opening the game up too early.

Fly half Guy Rushmere opened the scoring with a well taken penalty after 10 minutes. The St Andrew’s head boy was a key player in a fixture that required much composure and patience.

The immense atmosphere then cranked up a notch, as both schools were desperate to cheer their team on and make the difference needed for a win.

Handling errors were quite common in the game, as nerves were showing in such an important fixture. The game lacked continuity and didn’t seem to flow.

The locals sported a new and much changed back line, with centre Andrew Coxwell starting his first game since early last year. Jason Thomas was also moved to wing and Sinjin Broad was called up at scrum half. They all had a huge chance to repay their coaches faith in them.

After some impressive play by the backline from Grey, they eventually spotted a gap. Winger Jared Kirsten made a determined run down the sideline in search of the line and scored a brilliant try to set the scores at 5-3. Unfortunately for Grey, Easton couldn’t convert a tough kick.

It didn’t take long after that for Zondani to make his mark on the game for Grey. He too found a weak link in the SAC defense and dotted over. This time, Easton converted and Grey appeared to be in full control.

The boys from Port Elizabeth looked well organized and had some impressive backline moves and skills. The same could be said about St Andrew’s however, who also appeared to be confident yet patient in attack. Guy Rushmere was able to control his backline impeccably and was always a leader in both attack and defence.

As the whistle blew for after 40 minutes of pulsating rugby, the half belonged to Grey. They lead 12-3 after 25 minutes and never looked like relinquishing that lead. The locals were still full of confidence however, as it was just 2 years ago that they made an unbelievable comeback vs Grey. 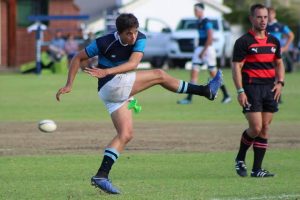 The St Andrew’s boys came out of their half time talk with confidence and the forwards were clinical in both line outs and rucks. Chris Poole looked like a perfect, complete hooker. It looks to be a bright season ahead for him.

Rushmere continued to kick with accuracy and intent and his hard work eventually paid off. After some relentless attacking by St Andrew’s, they eventually found a way through the tight Grey defence. Rushmere made a break and ran with great speed. He stepped Grey’s last defender to score a brilliant try. This would’ve injected some belief back into the St Andrews boy’s. He then picked himself up and converted his own try.

From then onwards, St Andrew’s appeared to find some continuity and composure, which they seemed to lack earlier on. Rushmere again found a good gap and passed to the big center Miles Danckwerts. He too ran the field with speed and intent, scoring another great try. It was typical of the St Andrew’s running rugby. It seemed as though the home team were going to run away with the game.

It didn’t take long for Grey to pick apart the SAC defense however, who were down to 14 men after Flank Dylan Wilson was given a yellow card. Right on their opponents 22, they threw long passes to their winger, Yolisa Dladla, who scored to level the scores at 17-17. It showed just how badly the Port Elizabeth boys wanted this victory.

Unfortunately for Matt Easton, he couldn’t convert. The scores were level at 17-17.

From then on, neither team could find the try line. Well trained defensive lines meant that neither team was given too much space.

The whistle blew, and the scores were even at 17-17. Both sides may have felt that they should’ve got more from the game but it was an impressive draw for all sides.

Once again, the massive rivalry between Grey and SAC lived up to its lofty expectations. 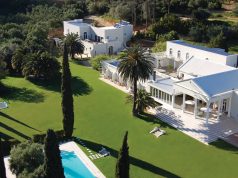 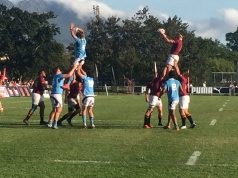 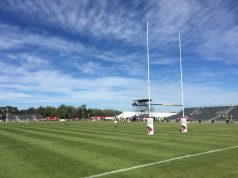 Rugby X – The Barbarians are Coming