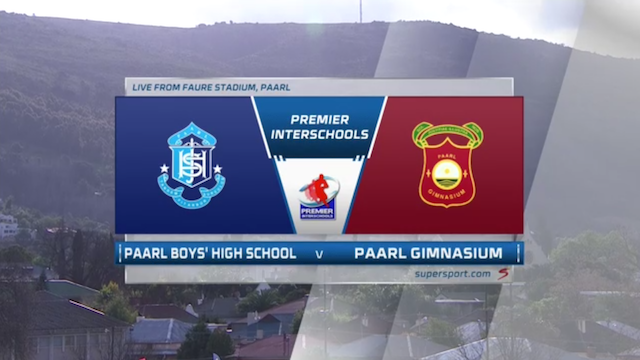 I only moved to South Africa just over four months ago and all I have heard about on a rugby front is that I must go to watch the Interschool’s match between Paarl Boys High and Paarl Gimnasium. In fact, every time I have visited in the last 10 years people have mentioned it. Where are you staying whilst you’re there? Paarl would be response and then the look and response: Oh, Interschools!

If I had a Rand for every time that someone told me that it was the biggest schools’ match in the world I might be sitting in a mansion above Camps Bay but unfortunately that is most definitely not the case.

The whole week leading up to this match is quite crazy. Every sport you can imagine is battled out across the town, both male and female (there is a Girls High as well as a Boys in the town) at all different ages and all the way down to C&D teams.

I took in some U13 girls Hockey on the Monday evening as my next-door neighbour was playing and although the game wasn’t the greatest spectacle the standard was extremely high and the competitiveness was ingrained deeply in both the students and of course the parents.

As the week progresses though all eyes start turning to the main event at the Faure Street Stadium. On the Saturday afternoon this old stadium becomes the central hub of the town. During the week preceding this match there have been Old Boy’s dinners, matches and anniversary ‘brags’ whilst the town is painted half blue & white (Boys and Girls High) and half red, green & yellow (Gimnasium). 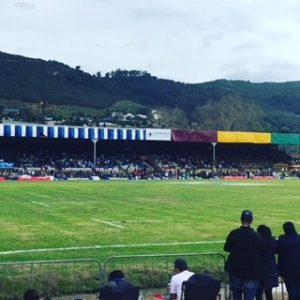 Kick off for the main match was at 4pm but we arrived at 2pm to catch the end of the u16’s A teams battle it out and then the U19’s B teams.

I was gobsmacked as I walked into the ground. It was just like attending a professional match with food vendors everywhere and a real buzz of excitement and expectation in the air.

Both teams have half of the grandstand each where their respective students sit in uniform and sing songs that they have evidently been practicing for years. What is most unusual though is that are being led by a full band and a bunch of older students who instigate the singing and pomp when they see fit. 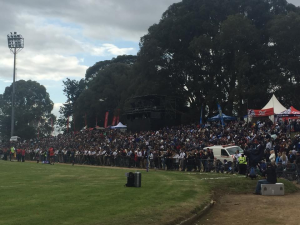 Opposite the Grandstand is where the ex-students and parents sit. A huge grassy bank sandwiched between the cycling track with some concrete, amphitheatre style seating.  This section was fairly quiet until the main game approached and the Brandy & Cokes the supporters had snuck in took effect.

The players walk, not run, on to the field and line up whilst shaking local dignitaries’ hands and their head shots are carried around by fellow students to introduce them to the boisterous crowd. They then have their fellow scholars sing the school anthems at them whilst marching bands and cheerleaders also strut their stuff.

Then it’s down the important stuff. The rugby.

I can honestly say that I was blown away by the standard of the rugby on offer. It was quick, precise and my oh my can these lads make some seriously big hits.

The breakdown work of some of the back row was perfect to a tenth of a second. Once over the ball, there was no moving some of them.

The side stepping, lineout work, goal kicking and lines being run by both forwards and backs was a joy to watch.

The most endearing quality about the rugby though was there were no long stoppages during the match like at senior level. The players dusted themselves down, got back up and started again.  It made for such a fast-flowing game which kept you interested from the off right until the dying seconds.

I’ve kept the match day programme as I know some of these players will go on to play some serious professional rugby in the future.  Watch out for names like Dawid Kellerman (Gim), Stravino Jacobs (Gim), Adrian Alberts (BH), Emile van Heerden (BH) and Evan Roos, the Boys High Number 8 who finished off one of the best tries I have seen live in a very long time.  The work of Boys High full back Trent Sivertsen in the build up made Quade Cooper’s stepping look pedestrian.

I read only yesterday that Roos has been snapped up by the Sharks and everyone mentioned above, apart from Kellerman, has been picked for the South African U18’s in their upcoming series with England, France and Wales to be played in the Western Cape. Kellerman has however just represented the South African Sevens team in Algiers a couple of weeks ago after setting Craven Week alight earlier this year as well.

It’s nothing new for this fixture to produce Springboks a plenty. Jean de Villiers and Corne Krige are two of the stand out names that have represented Gim and Boys High respectively. 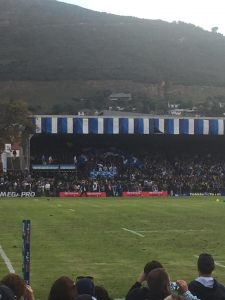 Back in the match and the ebb and flow was tense to say the least. Gim took the lead, Boys High looked like they were going to run away with it but Gim fought back and ended up just 3 points short as Boys High won 24-21. The final moments were as tense as I ever felt in a rugby stadium.

Cue a huge pitch invasion from one half of the stadium as the victorious players were lifted on to shoulders like demigods and their opponents sunk to their knees out of pure exhaustion.  They too were then lifted onto shoulders and chaired to the grandstand to be congratulated on their efforts by their adoring, younger colleagues.

Just to cap all of this off, the match was live on the national sports channel for the masses to watch and if you didn’t manage to take 5 minutes out of your day to watch the highlights.

I hope many a rugby fan did watch as this was not just rugby but theatre. It was sport at it’s purest form and I for one am counting down the days until next year in the hope that I witness a game half as good as this one.

RugbyX is coming to the O2