The start of 2018 was a time that Aaron Beesley, a current player for the England Deaf Rugby Team, will not want to dwell on.

He had just lost a couple of friends to cancer and upon reflection he realised that within the rugby clubs that he knew so well in Portsmouth, England, he was friends with at least five people that were battling or had battled this most destructive of diseases.

As Aaron knew too well though, it’s not just the person battling the disease that this affects but also the friends and family who are showing unquestionable love and support every hour, minute and second of the day.

Aaron, like everyone else in the rugby family, knew just how powerful this great game we love could be so he decided to start raising funds for cancer charities whilst calling on the support of the rugby community.

Rugby Against Cancer was born.

The team is made up of players from all over the country and in every squad, there has been a player that has either beaten cancer and is back playing or someone that has lost a close friend or relative to play in their honour.

There have been some international guest players over the past 7 months as well and more are being targeted to pull on the pink and blue shirt.

One of those players is Will Spencer, the Leicester Tigers second row, who has since agreed to become an ambassador for the charity. The England Elite Squad player grew up in Hampshire and after seeing the effect that cancer can have on family and friends both directly and indirectly, he jumped at the chance to try and raise the profile of the charity.

Another high-profile supporter of the charity is Bristol second row Joe Batley. In March last year, at the age of just 21, Joe was diagnosed with Hodgkin Lymphoma but in June he declared he was in remission and back in full training with The Bears.

The events that Rugby Against Cancer have held to date have been a huge success.

The first was held in the summer of 2018 and in the three events held so far, they have raised £10, 000 for charities such as Bowel Cancer UK, Teenage Cancer Trust, Children with Cancer, Bloodwise and Shine.

Another recipient of some of this funding is Adam Long. Adam is a rugby player for Portsmouth Rugby Club and was diagnosed with a very aggressive type of cancer at just the age of 23 and as the cancer became more aggressive the NHS could do less and less.

Adam researched other ways to fight the disease and found a type of therapy that would cost £100,000. The story became global news overnight and was reported in countries as far afield as South Africa.

In September 2018 Adam reached his target and is currently undergoing the treatment he needs.

I think that this may well be the perfect example of the rugby community that Aaron knew would help his great cause.

Word is spreading fast of the work that Rugby Against Cancer are undertaking and just last week they were invited onto ‘Rugby Tonight’, BT’s flagship rugby programme where Aaron was interviewed by Ugo Monye whilst an opportune, promotional photo moment with Saracens and England Full Back Alex Goode was not to be missed. 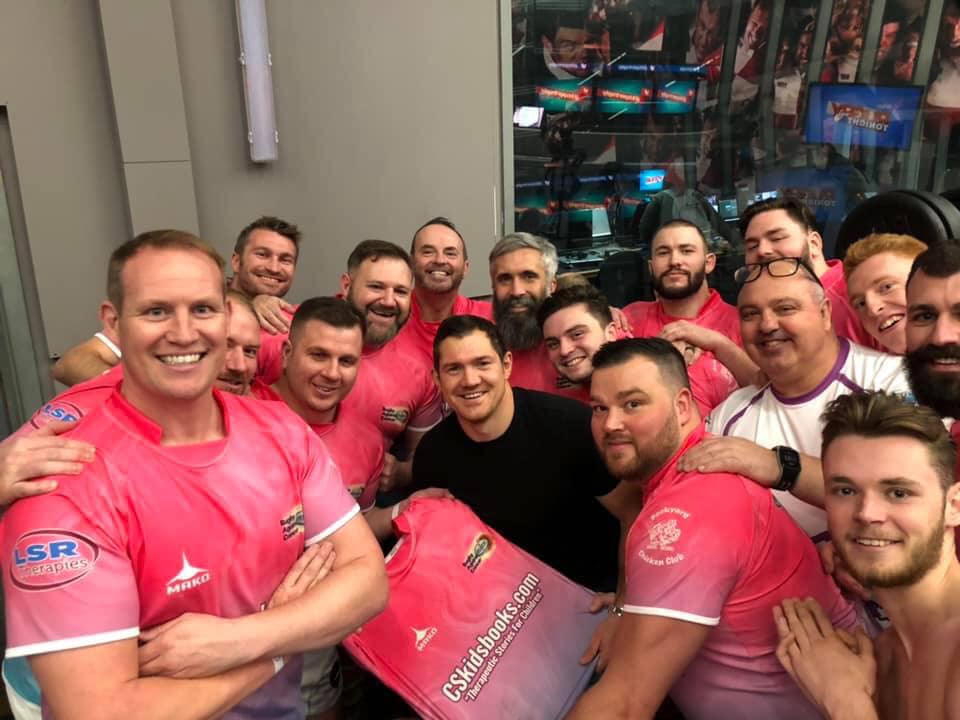 Following their appearance on the show, the invites have been pouring in for them play in 7’s tournaments and even an invitational match in Germany. The team have made one thing clear though, they will only play if the proceeds or a portion of the proceeds of the match or tournament be donated to local charities or players.

The glamour and lure of the TV studio and international travel will not waiver Aaron and his newly formed brotherhood from the task in hand, however.

Two more events are on the horizon and on May 3rd the team will ‘Trek 2 Twickers’. Setting off early on the 3rd, they will partake in a walk from H.M.S. Temeraire in Portsmouth and hopefully arrive at Twickenham before the kick off of the annual Army v Navy encounter as invited guests to watch the game.

Before that though they will be hosting their biggest event to date at Havant Rugby Club to raise funds for the Roy Castle Lung Cancer Charity and Rowans Hospice.

The event will see four matches played. There will be two U15 matches, one for the boys and one for the girls, before two invitational Women’s teams battle it out in a match that will precede the Rugby Against Cancer XV taking on a Legends XV.

All of these teams will be competing for the Pirate Cup.

The cup is named after Craig Bryden, who lost his own battle with cancer in October last year.

You may not recognise his real name but you will fondly remember him as the ‘Pompey Pirate’.

Craig arrived at his first chemotherapy treatment after diagnosis in 2016 dressed as a Pirate to show that this was the only way he knew how to face up to the disease. 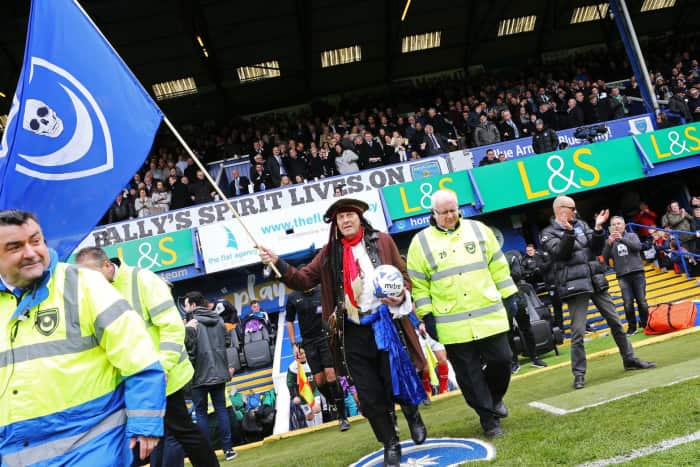 ‘My persona needs to be outwards and upwards and smiling’ Mr. Bryden stated in a BBC interview just after the pictures of him in his pirate outfit went viral.

The costume was not just for him but for others going through the same ordeal. It made people smile, lots of people in fact and that was something that Craig set out to intentionally achieve.

The Pompey Pirate become a hero not just to the people of Portsmouth but also to the rest of the country. His name was sung out loud by the fans of his beloved Portsmouth Football Club at their home, Fratton Park.

He even achieved his lifelong ambition of walking the team on to the pitch for a match – in full Pirate regalia of course.

Craig, who was also a veteran of the Falklands and Iraq Wars, unfortunately passed away in October 2018 but he has left a legacy behind that will be remembered for generations to come.

That legacy is being championed far and wide but none so more passionately than from his brother-in-law, Grant Morris, who is heavily involved in the Rugby Against Cancer Charity and who continues to turn out for them at every opportunity. If anyone knows why Craig should be recognised in this manner then it is Grant.

“Words like legend and hero are bandied around way too often and for meaningless things but with Craig these words do not do the man justice.” The scrum half passionately proclaims.

“Anyone who met him at any time of his life would tell you what a crazy, fun loving, honest and caring man he was.

A father, a husband, a brother, a son, a friend and a serviceman, he was an inspiration and so much more.”

When asked about Craig’s cancer and how he handled the challenges that he had to meet head on, Grant spoke extremely highly of his brother-in-law’s attitude and willingness to make other’s smile:

“He is the only man I know who could take cancer for an excuse to get dressed up as a Pirate to go to his first chemo session in order to put a smile on others faces and in turn become national news. He is now a Portsmouth F.C. icon.

Craig is loved by many people and I am 100% sure that his story and legacy will continue to inspire people.”

The Pirate Cup will be contested on April 19th and if you want to get involved or support then do contact Rugby Against Cancer via Facebook or Twitter.

Maybe you even have the urge to pull your boots on for one last time because let’s face it everyone wants to be a rugby player for one more day don’t they?

Varsity Cup – A Night at the Danie Craven