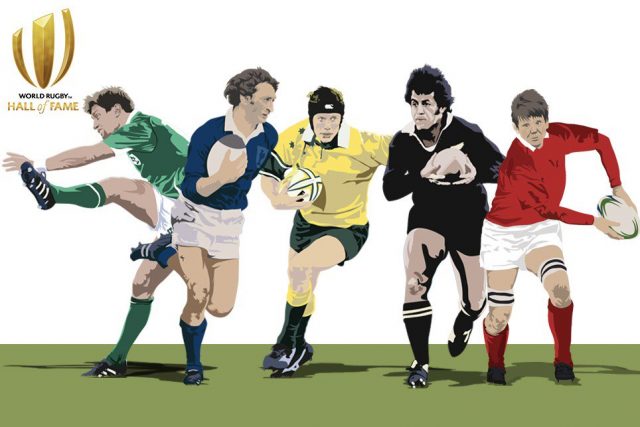 Liza Burgess is viewed as one of the pioneers of the women’s game in Wales.  She captained her country in their first ever test match in 1987 from the second row. Her international career spanned 20 years in which she earned 87 caps for Wales.

The former Loughborough student spent most of her domestic playing days in England but she was usually the captain of the teams that she played for which marked her as an inspirational leader. In her tenure as the Saracens captain she led them to an unprecedented treble of Premier League, National Cup and National 7’s titles all in the same season.

Since retiring from playing Burgess has been heavily involved in school’s rugby as Head of P.E. at Thornbury School in Gloucestershire whilst also providing support to the WRU as forwards coach for the senior team until 2014 and Head Coach of the U20’s.

Affectionately known as ‘Bird’, Burgess has taken part in 7 World Cups as either a player or a coach.

Believe it or not, Ronan O’Gara was born in America in 1977 but moved to Ireland at the age of just 6 months old.

Most of O’Gara’s amateur playing career was spent with Cork Constitution in the south of Ireland before he made his Munster debut in 1997.

He represented the men in red 240 times scoring 2,625 points at an average of nearly 11 per match. During this most decorated career he won the Heineken Cup twice and the Pro14 title three times.

In 2000 the Munster Man made his Ireland debut against Scotland in the Six Nations. O’Gara would go on to represent Ireland 128 times, an Irish record at the time of his retirement, whilst amassing 1,083 points in the process.  During this period, he also toured with the British and Irish Lions three times collecting two caps along the way.

O’Gara was famed for his ability to drop a goal and his most famous came in 2009 when he won the Grand Slam for Ireland in the 77th minute of their match against Wales in the Millennium Stadium.

Since retiring, O’Gara has forged a very successful coaching career so far to date. He joined Racing 92 in Paris straight after retirement and was part of the coaching team that won the Top14 championship in front of a record crowd at Barcelona’s Nou Camp in 2016. Whilst in his role as Defence Coach with Racing the club also reached the Final of the European Cup, eventually losing to Saracens in the Final.

In 2018 he joined Crusaders in New Zealand as the assistant backs coach and in his first season there they have won their 9th Super Rugby Title.

Stephen Larkham was born and raised in Canberra, ACT in Australia and went on to play all of his early to late club rugby for ACT and the Brumbies in the Super Rugby tournament before spending the last few years of his career in Japan at the Ricoh Black Rams

He and George Gregan formed a formidable half back partnership for both club and country and this was recognised in 2007 when the Brumbies named a stand after them in their honour.

Larkham first started out as Full Back with his eye for a gap seen as one of his many strengths but a move to fly-half just before the 1999 Rugby World Cup was when his career really took off.

In that World Cup he scored one of the most famous drop goals of all time from 48 metres in the Semi-Final against South Africa. It put Australia into the final which they also won to take home the trophy.

Larkham earned 102 caps for Australia, the last of which came at the 2007 Rugby World Cup against Japan.

As a one club man he has now gone on to coach the Brumbies and  is currently holding the position of the Australian attack coach under Michael Chieka.

Pierre Villepreux played 34 test matches for France between 1967 and 1972 at fly half or full back.

It is claimed that Villepreux holds the record for the longest penalty in International Rugby although these claims have never been proven. At Wellington’s old test ground Athletic Park, which was famed for its terribly windy conditions, the French full back kicked a penalty from a reported 70 yards. Other reports claim now that it was 70 metres but it has never been proven. One thing is for sure though, it was heavily wind assisted.

His stats and win ratio as a player are not much to write home about but Villepreux will be most famed for his coaching and seen by many as a visionary that was ahead of his time.

He formed a formidable partnership with Jean-Claude Skrela in the early 1980’s at Toulouse. They won three league titles and then the pair moved on to coach France in 1986 where they won back to back Grand Slams.

In 1999 they coached France to the Rugby World Cup final in Wales, beating the All Blacks along the way in one of the most memorable games of knock out rugby the world has seen.

Villepreux and Skrela are often referred to as the coaches that invented French Flair.

Sir Bryan Williams is a former All Black winger who also coached Samoa in the 1999 Rugby World Cup. He masterminded victories over host nation Wales and also Argentina in the pool matches before narrowly losing to eventual champions, Australia.

Of Samoan descent, the Auckland Born Williams made his All Black debut in 1970 on the much-maligned tour to South Africa. On this tour he scored 14 tries in 13 matches including two in the test matches against the Springboks.

He played 113 times for New Zealand with 32 of those appearances in test matches.

In 2003, the NZ Herald named him in their 100 greatest All Blacks of all time and in 2018 he was knighted for his services to Rugby.

He held the position of President of New Zealand Rugby from 2011-2013 but his last of accolades seems endless.

Springboks can’t Blame Anyone but Themselves for Loss to England

At The Bottom of a Ruck – Deon Carstens