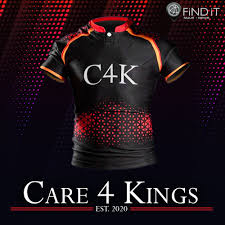 To all of Mzansi’s rugby fans, here’s a chance to support the game by taking part in the Care 4 Kings’ fundraising initiative. A live online auction featuring rugby memorabilia, the event will take place from 16 – 17 October 2020, and will be hosted by former Springbok rugby player, Braam van Straaten at www.care4kings.co.za. All the earnings will go towards financially aiding the Southern Kings players and staff, after the club announced insolvency on the 19 September 2020.

A great number of players have come forward in support of the initiative, and have donated several rugby memorabilia for the auction, which include:

Care 4 Kings is overwhelmed by the local and international support from the rugby fraternity who took time out to create support videos such as Eben Etzebeth, Frans Malherba, Lindsay Weyers, Mzwandile Stick, Chris Dry, AJ Venter and Rob Louw.

Care 4 Kings golf day and gala dinner: Join us for a day of golf at one of the most beautiful golfing courses in the Eastern Cape, Fish River Resorts, on Thursday, 26 November 2020. Price: R10 000 per four ball, there are 20 x four balls available. The price is inclusive of: golf with golf carts; halfway house snack box, Care4Kings gala dinner, auction and prizegiving at the gala dinner, accommodation (with breakfast) for a one-night stay at the Fish River Resort. To book, simply email Braam van Straaten at braam@care4kings.co.za.

For our rugby fans who would love to get involved in future auctions or want to donate towards the initiative, contact Braam van Straaten directly at braam@care4kings.co.za.

For cash donations, please use the following banking details:

When making the transfer, please use the reference: CARE4KINGS and your full name.

Stay in the loop by following the Care 4 Kings initiative on all social media platforms where details on upcoming events will be shared:

Media release issued by Terras Communications on behalf of Care4Kings

For press assistance or to receive a copy of the various video’s contact Lauren Terras on +27 82 785 2644 or e-mail lauren@terrascomms.com. For further information on Terras Communications visit http://www.terrascomms.com/

Some of our fellow rugby players and staff are in dire need of our help. That’s why Care 4 Kings are calling on the rugby family of South Africa to come forward and help.

This is according to Braam van Straaten, former Springbok rugby player and coach at the Southern Kings in Port Elizabeth.

The sole purpose of this initiative is to financially support the players and the staff of the Kings.

Van Straaten took the initiative to start a committee who will conduct a number of fundraising initiatives for the Kings in the upcoming weeks. The first one being an online sports memorabilia auction taking place on 16 & 17 October 2020.

“Care 4 Kings, an initiative to support the Kings, were started to support the players and staff. I will act as the chairman of Care 4 Kings and have put together a team to help me. Piet Heymans, from Sport Employees Unite, Rudi Ferreira, from FiND iT news agency, Robbie Kempson, previous director of rugby of the Southern Kings and Cassie Carstens, sports administrator, will assist me,” says van Straaten.

Care 4 Kings are pleading with rugby enthusiasts, businessmen and the general rugby community, as well as current and ex-rugby players as well to become involved with this initiative and support the players and staff in their hour of need.

“The sports memorabilia auction will be a unique event, as current and past players will be asked to donate some of their rugby memorabilia and our other two fundraising projects will be made public soon. For now, please join our Facebook page: Care4Kings (click on the link) or Instagram @care4kings, for updates on what is coming,” encourages van Straaten.

Herewith the banking details for Care 4 Kings to back this initiative. This account is administered by Opus Accounting.

Proof of payment to: hello@dottrymedia.com

2018 World Rugby Hall of Fame Inductees – Who Are They?

Rugby X – The Barbarians are Coming