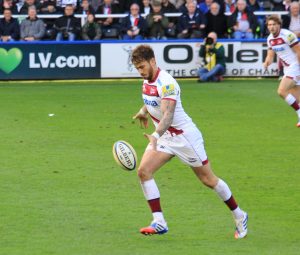 Like many, I was quite surprised to see Danny Cipriani’s name left out of the latest England training squad as he has been in sparkling form for Gloucester at the start of this season.

At first it seemed quite obvious that Eddie Jones was telling some porky pies surrounding Cipriani’s lack of form compared to others in the squad. It is clear that the RFU are not the biggest fans of the formers Wasps fly half and the way he was treated over his latest misdemeanour in Jersey by English rugby’s governing was farcical at best and downright demeaning at worst.

As per usual the RFU had to stick their noses in where it wasn’t welcome and put Cipriani through a process unnecessarily after his club had already dealt with the situation and laid it to rest.
They acted like over bearing parents that were punishing their child after he had been sent to detention already.

On the face of it this would point to the RFU having some control over selection in an advisory manner to Jones but that is not the case here.

The England Head Coach made reasonable argument as to why he believes Cipriani isn’t ready to be back in the squad and those arguments are more than valid.

Jones has suggested that Cipriani is a ‘highlights reel’ player and needs to be able to play a full 80 minutes on the gain line at first receiver.

These comments do make sense as the Cherry and White stand off can often be waiting for that one time where he can produce a Hollywood moment just as he did in Cape Town for England’s last test against South Africa.

The other reason that Jones should be taken seriously his reference to going to live games on a regular basis.
The Red Rose boss goes to three Premiership matches a weekend and as he rightly said:

‘There are things you don’t see on TV’

I was at that last test in Cape Town and whilst watching it live it was clear to see that Owen Farrell is who Jones really wants in the first receiver channel more often than not.

Cipriani didn’t control the match that day, it was Farrell. Cipriani stepped back at times to allow his opposite number from Saracens take the lead.

The match will always be remembered for that try that Cipriani created for Jonny May on the highlight reel that Jones was talking about but the whole picture would be painted very differently if you looked at his 80-minute contribution.

That said, to have a man in your squad that can produce that sort of skill at an important moment in the match then will always be an argument to have him included even if he isn’t first choice.
Farrell isn’t Cipriani’s main challenger though. George Ford is.

The Leicester Tiger hasn’t been at the top of his game for the past season at least but he is always looking to play front foot ball in the ten channel and doesn’t shy away from this particular responsibility. That is one of the many reasons that Ford has been a constant in every Eddie Jones squad.

I’m of the opinion that Jones actually wants Farrell as his starting outside half with a bulkier inside centre to partner him. The issue there is that Manu Tuilagi and Ben T’eo are so injury prone that they rarely make it to starting line. Tuilagi especially has been missing for two years now and as sure as night follow’s day, he has pulled out of this training squad as well.

With that in mind, it is therefore the safer option to revert back to his tried and trusted partnership of Ford and Farrell.

It doesn’t excite the fans who want to see the open and expansive game that Cipriani may be able to bring to the table but we are a year out from the next World Cup almost to the day and Jones seems to believe that trialling the controversial and ex, aptly named Melbourne Rebel is not a gamble he is willing to take.