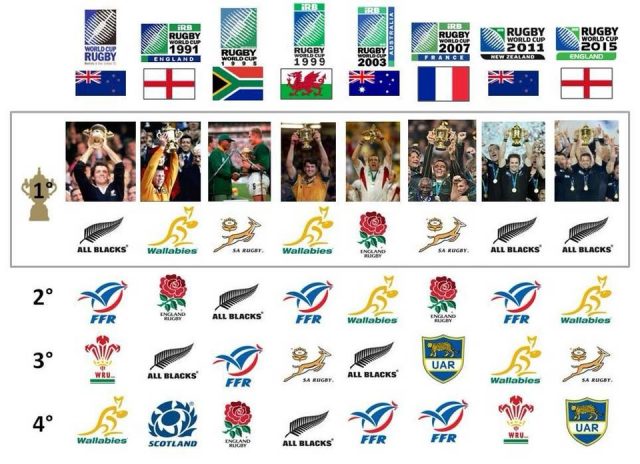 The beauty of sports is that we will always believe our team is capable of winning, even when the odds are stacked against us. Sometimes this irrational hope comes off and our blind faith is rewarded by sharing in our team’s sense of triumph. Mostly, however, a team will lose when faced with overwhelming odds. The reason for this is that sports, like everything else, can be broken down into numbers. Every single variable which can influence a match’s outcome can be quantified, and a probability attached to a certain outcome being reached. If you doubt this, just look at bookies: they have built a whole industry based on playing the odds and are essentially banking on their numbers to prove more accurate than that of the bet placers.

With the Rugby World Cup approaching its 9th iteration this year, fans will again be hoping their team can defy the odds to World Cup glory (unless their team is the All Blacks, of course). But what are the lessons we can learn from the previous 8 tournaments? Coaches and teams will have gone into hours of analysis to tease out the most reliable indicators, or combination of indicators, which may help them achieve a RWC win.

I have taken a high level approach to try and achieve the same. This analysis does not consider player specific stats (other than their caps) nor does it look at coaches, playing conditions, or any of the other myriad of factors which can influence games. Instead it looks at general form of teams leading into a RWC, the experience of national squads and how they fared at the past tournaments. Undoubtedly, the fine scale attributes such as conversion rate of place kicking (possibly drop goals as well?), the number of kicks form hand or set piece dominance, for example, will also offer valuable insights into RWC matches and could possibly be explored in a future article. The data used in the analysis was sourced from Statsguru on ESPNscrum.com, the world rugby website and Wikipedia. The timeframe of the data ranges from the first World Cup played in 1987 to the latest one in 2015.

1. Every Game is a Final

Firstly, when considering World Cup achievements, I have used the win percentage at any given RWC as the metric which indicates success. The table below shows that every single team who has ever won a RWC has won 100% of their matches at that RWC. This in itself is an amazing stat, and I therefore had to double check it. It is of course conceivable that a team who has lost one, or maybe even two, of their pool matches can make it into the playoff stages and then go on to win a final, but this has never happened. It is also possible that a team which has won all its pool games and then lost the first playoff game, such as Ireland in 2015, may end with a higher win percentage than some teams which advanced further in the competition, as South Africa did. Generally, though, win percentage tends to be a pretty good metric for how well a team did at a RWC. You can therefore be sure that coaches will be emphasising the importance of winning all their matches at the World Cup this year.

You may think that the Rugby World Rankings should be a reliable indicator of which team is likely to return with the best placings at a tournament, but this is seldom the case. Since the Rugby World Rankings started in 2003, the top three teams have only once claimed their medals in that respective order. The 2003 tournament saw all three the top teams claim medals, but only England, who was ranked number one, achieved gold. Second ranked New Zealand received bronze and third ranked Australia received silver. In 2007, South Africa emerged as winners from a meagre world ranking of 4th, while England, ended as runners-up, from a 7th placed ranking and Argentina won bronze from a ranking of 6th. New Zealand won the 2011 tournament as world number 1, but France won silver from a 4th placed ranking and Australia won Bronze while ranked 2nd. The 2015 tournament has been the only RWC to date for which the 1st, 2nd and 3rd ranked teams won gold, silver and bronze respectively.

The reason that the world rankings may not offer the most accurate indicator of World Cup success is that it uses a track record of teams’ recent performances, and weighs these performances based on the ranking of the opposition team. A successful RWC campaign will however have a lot more factors at play than just those that influences the world rankings in a non-World Cup year. World Cup performances are confounded by the fact that it consists of up to 7 matches in the space of a couple of months and squads are continually subjected to a high stakes and high pressure environment. It therefore emphasizes the importance on man-management in the squad as both the physical and mental welfare of players will have to be considered. It is notable, in this regard, that the Springboks have created a new position in their management staff which’s primary role is to look after the welfare of players.

Because of the formula used in calculating the world rankings, the rankings closely tracks the form displayed by teams in the four years building up to a World Cup, and therefore also has little correlation with the outcome of World Cups. Further analysis may reveal an optimum time for teams to start peaking, and therefore not consider the whole four years before a World Cup starts. This may lead to a stronger relationship between the form displayed going into a World Cup and the achievement at that World Cup, but with only 8 World Cup tournaments to draw from, limited data makes it a tough ask for analysts to find any measure of certainty in such results.

Test caps are an interesting metric when it comes to analysing World Cup successes. It directly measures the experience of players and thereby forms a scale which ranges from young and fast to old and wise. Young players may have the natural talent and athleticism to warrant their place in a squad, but experienced players will find it easier to keep their cool when faced with pressure situations.

It is therefore a favourite statistic of an analyst. It has demonstrated some clear trends in that you can often find a clear relationship showing the team with the highest number of caps in a World Cup final usually wins, while it is also evident in that the total number of caps for World Cup winners are growing every time the tournament is held. I prefer to look broader than just the team selected for the final. As I pointed out earlier, World Cup winners have won ALL their games in the respective tournament they have won. Inevitably, injuries are bound to occur throughout the tournament, and the “locker room effect” of experienced players who are not be part of the match day squad should not be underestimated. This points to considering not a team as the basic unit which determines World Cup success, but rather the squad.

There is indeed a case to be made for retaining experienced players in key positions, attested by the perseverance and ultimate reward for keeping players such as Keven Mealamu, Os du Randt, and Lawrence Dallaglio in previous World Cup winning squads. This would suggest that there could be an optimal distribution of caps through a squad, where players in key positions and leaders are chosen for a World Cup campaign. In these cases, the players may arguably not be the best choice based on their physical performances, but coaches recognise their contribution to the squad as bigger than just the shift they put in around the park.

5. Distribution of Test Caps in a Squad

When New Zealand won the RWC in 2011, they had seven players with 20-30 caps in their squad, which was second to only Scotland for that amount of caps. They also had the outright highest number of players capped between 50-60 times (5), and had only one player with more than a 100 caps.

During the 2015 RWC, New Zealand again had a high proportion (6) of players with 30-40 test caps relative to the other squads (only England had more). Their 2015 squad again had 5 players with 50-60 caps, the most for all the teams at the competition. They had 4 players with more than 100 caps and were the only team with a player with more than 130 caps (142 for Mr McCaw, to be exact).

Although it might not be obvious at first glance, the 2011 and 2015 New Zealand RWC squads are predominantly composed of players with 30-60 caps for their country. This means that they have the majority of their players with a high number of test caps, while also being at their physical peak when they arrive at the World Cup. Based on this data, it is very rare for them to take players with no test experience, and out of all the countries comprising this analysis they have taken the least number of players with less than 30 caps for the last 2 RWCs. If New Zealand plays an average of 14 test matches per year, it means that they will start preparing the bulk of their World Cup squad as soon as the previous World Cup has finished, and will probably have identified them well before that even. It also indicates that RWC planning in New Zealand runs in four year cycles, and would explain why they also retain couches for a minim period of four years.

The All Blacks are unparalleled as a sporting team for their tremendously high win ratio. For a long time they have been unable to translate this high win ratio into a RWC trophy since they won their first in 1987. The distribution of test caps in their two previous RWC squads has undoubtedly contributed to them correcting this. They have long since established the habit of winning in their team, and it seems that they now use caps as their steppingstones to World Cup glory.

For teams who haven’t done their long-term planning for the World Cup, or who’s plans haven’t quite come of due to coaching or player disruptions, expect selectors to load up on old timers.
Players like Kieran Read (118 test caps), Johnny Sexton (83) and Alun Wyn Jones (125) are obviously pick regardless of their experience, but the influence of players such as Tendai Mtawarira (107) in the Springbok squad, Dan Cole (85) for England and Greig Laidlaw for Scotland (68), although sliding down the pecking order, may be just as important due to the sense of calm they can exert within a squad.

Don’t be surprised to see Adam Ashley-Cooper (aged 36) named by Michael Cheika in the Australian squad like Matt Giteau and Drew Mitchell were four years ago. With 116 Caps of international rugby knowledge playing in numerous positions can be invaluable to any squad.

Giteau and Mitchell were 33 and 31 at the time and before ‘Giteau’s Law’ was introduced to make them eligible for playing, the Australian team were on a horrendous run of form.

It proved to be a masterstroke as they managed to halt their poor run of form and got to the final after adding that much experience to their squad. Expect other teams to do the same as a last minute fix this time around.

Six Things From the Six Nations