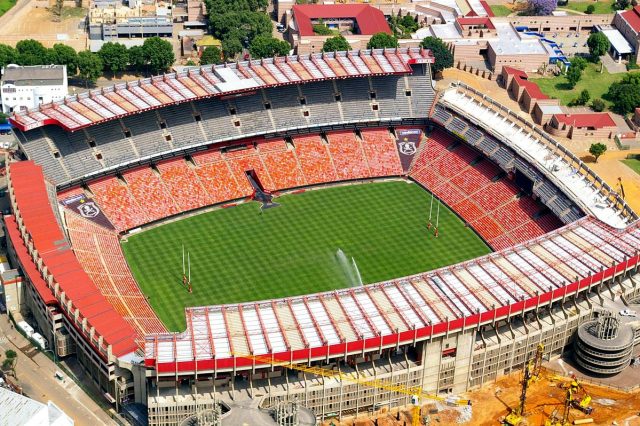 A new dawn with a new coach and a newly appointed historic captain is rising over the Springboks this weekend when their first test match under new Head Coach, Rassie Erasmus, kicks off in Johannesburg on Saturday.

Erasmus started his tenure with a narrow defeat to Wales after a controversial Test Match in Washington last weekend but this is his first match of any real significance as he charts the Springbok’s course to the next World Cup.

The three new caps of S’busiso Nkosi, Aphiwe Dyante and RG Snyman will be looking to make their mark on their respective debuts but Nkosi and Dyante especially will add a real sharpness and injection of speed alongside Willie le Roux at full back who returns to the fold after a two year exile.

Faf de Klerk also comes back into the team for the first time since 2016 and if his form from the English Premiership season can be replicated at international level then Erasmus will have surely found a solution to a problem position very quickly.

In the forwards, Duane Vermeulen returns to the Number 8 jersey where his battle with Billy Vunipola could well be one of the keys to winning this opening test.

The second row is light on experience with both Eben Etzebeth and Lood de Jager’s unavailability due to injury and may be an area of vulnerability as Franco Mostert’s 10 caps will partner new cap Snyman.

England have also handed a debut in the second row to Nick Isiekwe who partners his Saracens team mate Maro Itoje.
One of the most intriguing battles of the day though will be in the back row where Tom Curry will go head to head on the openside with the new South African skipper Siya Kolisi. Curry only has one cap to his name that he gained last June in Argentina but his form for Sale in the Premiership and his extremely encouraging international debut last June all point to Curry becoming a stalwart in this England team for years to come.

Kolisi can class himself as a stalwart now and with the captaincy in his hands as well expect a hugely fierce and combative performance from him that could potentially make or break Curry’s fledgling career.

In the back three Eddie Jones has raised some eyebrows with the selection of Mike Brown on the wing ahead of deadly finisher Denny Solomona. Brown is a favourite of the former Australian Head Coach and his selection may confuse with such a speedy Springbok back line on show but Brown is exemplary in the air and this would suggest that he may spend quite a bit of his evening chasing box kicks rather than trying to burn Nkosi on the outside.

Both benches are lacking experience but that is not to suggest that they are not going to make a significant impact.

Replacement front rows Akker van der Merwe and Steven Kitshoff over as much dynamism as they do ballast and the mercurial pair of Elton Jantjies and Warrick Gelant offer sparks that can be ignited should the game open up in the last twenty minutes.

One name sticks out on the England replacements sheet and that is of New Zealand born Brad Shields from the Hurricanes in Wellington. A contentious pick to say the least but when you look past the politics of his inclusion there is a genuinely top class back rower ready to be released on this test series.

Solomona, much like Gelant, can make something from nothing whilst the live wire Ben Spencer could make his debut at scrum half from the bench.

This could well prove to be quite a scrappy affair with two sides trying to get the upper hand by playing two very differing styles of rugby coupled with new combinations across the park.

South Africa will want to use the high altitude that Ellis Park offers them to their advantage and move the ball quickly to release the back three in space and behind the England midfield but England look set up to take this game by the scruff of the neck up front. They will surely target the front five with their power game to get the sort of front foot ball that deserted them during this year’s Six Nations.

This would allow the ball handling trio of George Ford, new captain Owen Farrell and Henry Slade to control proceedings. One thing to watch is Slade and Daly who have boots that can send a ball many a mile so long range penalties and kicks to the corner could well be used as ruthless weapons.

South Africa will have taken note of England’s failings at the breakdown during the Six Nations as they were decimated in that area for the final three matches and if they get the upper hand again then it could be a long 80 minutes for the Red Roses watching penalties sail over there head.

The quality may well not be the best we ever see this weekend but it will not make this first test any less compelling.

SOUTH AFRICA WILL BECOME AN EXPORTER OF RUGBY PLAYERS

Lions Win could Save Super Rugby