The last few months have really saddened me as a lifetime rugby lover and supporter.

Negativity is engulfing the sport and it’s not just here in South Africa, it’s everywhere. From Schools all the way up to international level, there are issues and dire situations that are currently being dissected by millions on social media the world over.

You know the one’s that I am talking about so let’s just leave it there but one thing I will say is that I have needed a shot in the arm of rugby magic to get the juices flowing again.

To digress slightly, this particular journey started one morning when I was driving into Stellenbosch with my wife. The usual Turquoise and Pink posters were on all of the lamp posts and she asked me why I wasn’t going to cover Varsity Cup? I gave some lame excuse about trying to find work and not wanting to over extend myself…weak I know.

I got ‘The Glare’ of disappointment from the driver’s side and thought, I hate to admit it, she’s right.

The next morning, I applied for the accreditation and a week later I was off to The Danie Craven for Maties v Wits. I left buzzing and was immediately hooked, wrote an article about it and now Varsity Cup went up the priority list to the top. Don’t tell the wife that!

Match after match I drove through the mountains to Stellenbosch and watched the matches, produced more content and fed off the positivity that surrounds the tournament.

I genuinely mean this when I proclaim what I am about to and you may feel that it is a touch sycophantic but, from a media perspective, this is the best rugby I have ever been involved with.

It’s not just that the rugby is of the highest quality that you could wish to see but it’s also the place, the people and the atmosphere that make it so special.

I only travelled to Stellenbosch to watch live matches and I’ll get on to my plan for next year soon but from everything I have seen, heard or read, each venue has the same sort of charm and people involved.

Let me give you an example:

Every match, without fail, I would walk up to the media benches and be greeted by the Stellenbosch University Head of Sport, Quintin van Rooyen. A busy man to say the least.

When greeting me he would give me a means of getting something to eat, drink and inform me of all the last-minute changes in both teams and any try scorers that we couldn’t see with the naked eye at the bottom of the ruck. Small gestures that helped immensely.

The players were all so accessible. Apologies to more than a few of them for shoving a camera in their face to interview them after I had pulled them away from their loved ones or celebrating team mates. Even bigger apologies to the ones that had just lost and probably the last thing they wanted was an English bloke asking them politely to not speak Afrikaans!

Some of them are future Springboks, have no doubt about that.

The fans were incredible as well and always happy for a quick interview or snap for my site. The accessibility and freedom that was granted to me and the other media representatives sums it all up and epitomises the competition – an open door full of trust and creativity.

There is no arrogance about the tournament. It’s not stuffy in any way at all.

Pieter-Steph du Toit was at every game supporting his brother, Anton. No special treatment for South Africa’s best current player, nor would he seek it, but great to see him there all the same.

Mr. Francois Pienaar, the brains behind the tournament, took time to greet everyone and even let me chat to him for a bit. The Springbok legend never made me feel like I was impinging on his time at all, he seemed pleased to meet me and talk about my articles in fact. Genuinely a proud moment for me to meet him for both rugby and personal reasons that I won’t divulge here. 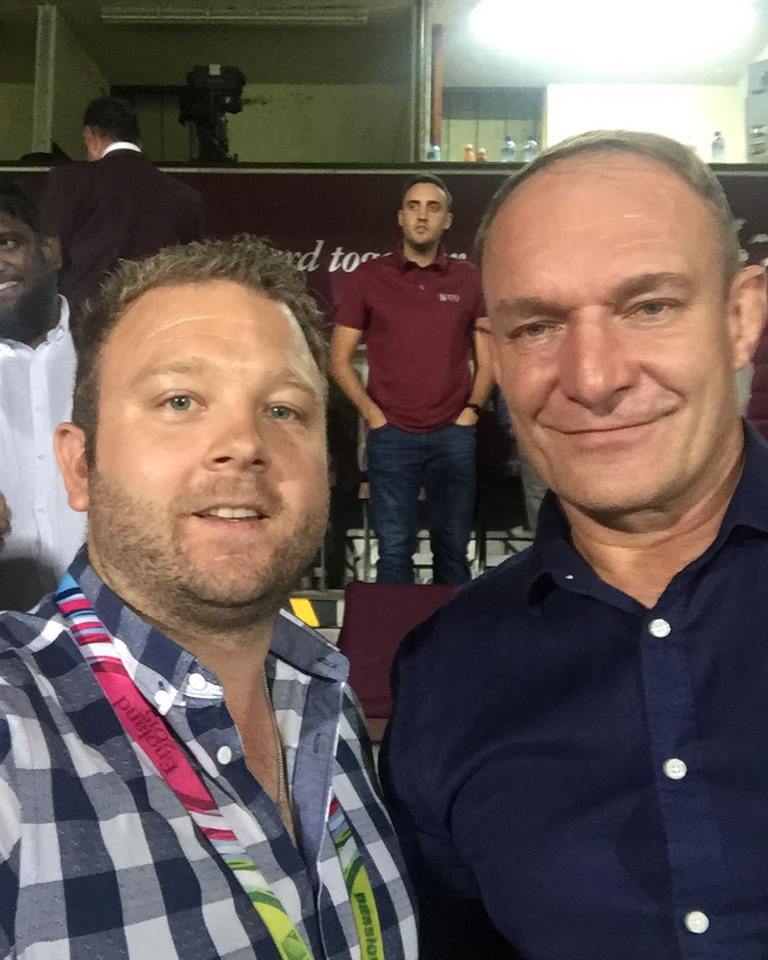 The media agency made me feel like I was part of the team as well. Thanking me for content and the way I go about it.

I even got asked if I was Mr. Scrum5ive from the video’s once! 😉

Let me flip this on its head for a moment though and ask you a question.

Have you seen any negative press around Varsity Cup?

You will have from schools, Currie Cup, Super Rugby, Grassroots in England and certainly at international level but have you seen any about University Rugby?

I haven’t. Maybe I am wrong but I have done bucket loads or research for this tournament and haven’t seen a single thread of negativity.

In this modern world of keyboard warriors and ‘freedom of speech’ do you not find that remarkable?

The final was epic to say the least.

A red card, Pokkel (Maties Mascot) got arrested for pitch invading, incredible rugby and celebrations that are probably still ongoing.

I was given the opportunity to commentate on the game with Paul Stubbs, a renowned commentator for Super Sport. Yet another down to earth person with no ego at Varsity Cup.

Amazing experience to work with him.

Next year, finance and time allowing, I want to go to more venues and soak up the atmospheres at different Universities.

The Green Mile in Cape Town looks like an awe-inspiring ground for instance and I want to experience that. Watch out UCT player’s, I’m coming for you with my camera!

The point I am trying to make here is just remember why you love rugby. Watching it and playing it. Simple as that.

This weekend or next, get up and go and watch a match. Support your local club, school or a lower league club. You may just enjoy it a bit more than a Super Rugby or Premiership match with people hurling abuse at the players. You may even see a player that has the ability to go all the way and you can say you saw them first!

For the 2020 edition, get to your nearest University that are in the Varsity Cup or Shield and enjoy the razzle dazzle of the event whilst watching top quality, fast and exciting rugby.

In a sea of negativity there is a rock pool of positivity for you.

Dive in, the water is warm.

Thank you Maties for looking after us all so well.

Thank you, Varsity Cup, for a brilliant tournament and………

Thank you Mr. Pienaar for bringing all of the above to our rugby lives.

Mr. Scrum5ive off the videos!

P.S. There was one negative – Hearing ‘I’ve told you to listen to me more often’ from Mrs. Scrum5ive has been hard to take!

She’s got a point though…..

Cipriani England Omission not that Surprising