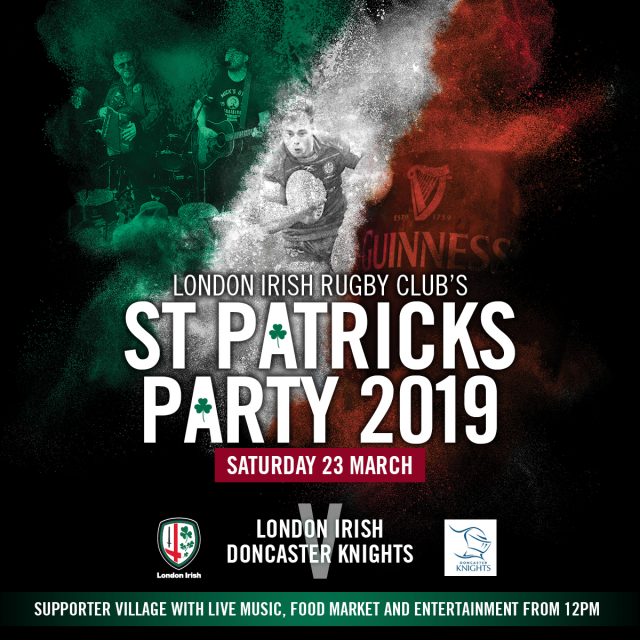 The famous London Irish St Patrick’s Party game is back for its 18th year when Doncaster Knights make the trip to the Madejski Stadium on Saturday 23 March 2019, Kick Off 15.00.

The biggest game of the Exiles’ calendar, London Irish’s St Patrick’s Party has gained a reputation for being the party of the season with non-stop music, entertainment and great craic. With celtic rock bands BibleCode Sundays and The Reels confirmed for this year’s bash, the 2019 St Patrick’s Party promises to deliver another unforgettable occasion.

This year, London Irish are excited to be partnering with Tourism Ireland to bring party-goers a true taste of Irish culture in the Supporter Village with a number of artisan food stalls, producers and beer tents for an immersive and authentic taste of Ireland.

The St Patrick’s Party has been a favourite amongst supporters since the first was played at the Madejski Stadium on 17 March 2001, when Irish prevailed 13-10 against Northampton Saints.

It has since gone on to establish itself as a standalone fixture in the rugby diary and is attended by supporters from all over Britain and Ireland.

As well as being an unforgettable occasion off the pitch, the iconic clash has served up some memorable moments on the pitch down the years as well. In 2007, the Exiles beat Wasps 16-13 but the game will long be remembered for flanker Juan Leguizamon dropping the ball over the try-line when attempting an extravagant celebratory dive.

If you’ve never experienced the St Patrick’s Party then it’s time to find out what all the fuss is about!

Tickets are available from just £20 for adults and £5 for children, with group discounts and family tickets available. Visit www.lidirect.co.uk or call 0118 968 1016 to book your place at the party of the season.

World Schools International Contingent Made up from Five Different Nations